When Olivier Ficco from strassenfotos asked me that question last year, I couldn’t answer first. “Best memory” isn’t the same like “best picture”. If he had asked for the last, the answer wouldn’t have been much easier. Is it sharp, well composed, vibrant, contrasty? Is it often viewed, liked or commented at my Instagram or Flickr stream? Regardless of the content and the technical quality I like pictures, wich tell a story about the subject or the photographer itself. For every photo I’ve taken on the streets is a story – a memory – behind.

The very first picture I’ve taken as a “street photo” was the picture above. A few weeks ago I discovered street photography as an interesting art. I sat on a bench in a park, saw the silhouettes of people and took pictures of them with my smartphone. That was the beginning of a passion. 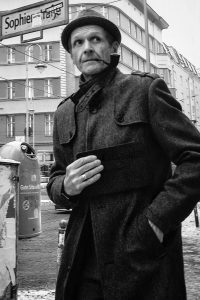 One of my favourites is this Sherlock-Holmes-look-alike man in Berlin-Mitte. It was a cold winter day in 2016. After shooting a few people in candid situations with no keepers, I saw this guy, old-time fashioned like a time-traveller. Unfortunately my camera was in manual mode (zone focus for a different range) and the result is blurry. But for the story isn’t that so important.

Maybe the best memory of taking a certain photo is about the picture above: A girl, sitting at a wall with sore feet. It happened during a workshop with Eric Kim in summer 2015. Imagine summer in the city at 37 °C (approx 98 °F) and people have only two options: go crazy or go lazy. My shooting buddy and I had the assignment to approach people and ask them for a portrait. We had to collect ten “yes” and ten “no’s” and walked the streets up and down near Hermannplatz in Berlin-Neukölln. This is a part of the city, that stands for the term “melting pot”. A very young lady entered the street, where people usually are dressed in casual or alternative style. But she wore a loud dress with small squares, red shoes, red handbag, red belt and red lip-gloss. A voice within me whispered: ‘Pic of the day! Ask for permission! Go for it! What can you loose?’ But my partner and I considered, that two sweat-soaked guys with a camera approaching a young lady could have a strange effect. The inner voice teased: ‘Loser!’

Damn right, I was so upset! Lucky for me I saw her surprisingly again an hour later with one shoe in a candid situation. I raised my camera up and did some shots without composing. The inner voice teased: ‘Coward!’ But anyways, I got it, I love it and it is one of the most viewed pictures in my photo stream.